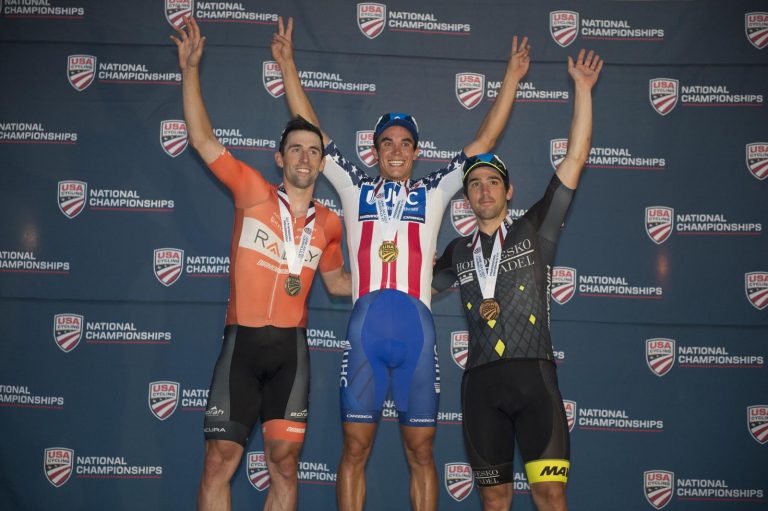 Racing done, the sky getting dark, we were in Louisville, Kentucky, on a street corner waiting. Team Rally had finished  their post-race snack and sit, and were getting ready to head back to their motel. A van and a car, both covered with bikes and wheels atop racks, plus a large mechanics’ trailer were being loaded. The mood was somber– they’d taken second in the big race. Men’s mechanic Erik Maresjo, the guy who makes sure victory is possible, handed me a foil-wrapped burrito and an All-Day IPA, the post-race snack my son had missed. The race helmet- his brain bucket- got snapped around the handle of his gearbag. Everything was done loading.

We were just waiting for Eric who was delayed by the necessity to pee into a cup for the mandatory routine drug-control testing, the policing of the sport. Compared to the European race scene there is less pressure to perform in American racing, but the enforcement process is the same. Everybody pees when required, always if you win, sometimes if you don’t.

Second place makes a Dad proud and teammates sullen. If you get the win you also get the jersey, the interviews, the backslaps and high-fives and phone calls. If you take second you get the WTFHAPPENED?! and the Tweet about making the podium.

The sky looked darker and darker. Louisville was all finished hosting an entire weekend of championship races sponsored by USA Cycling, including Sunday dedicated to criterium championships. There is a race and a stars-and-stripes jersey for each age and gender classification: Junior men and women (under 18), U23 men and women (ages 18-23 years) Masters men and women (over 40) and then the skill classifications of Categories 3,4, and 5 (beginning racers) and Categories 1 and 2 (experienced racers with victories at lower levels), again both Men’s and Women’s.

The two culminating races that end the weekend are the Pro Women and the Pro Men, raced as teams but won by individuals. Eric has been fortunate to race in multiple championship competitions and has come out on top, but today was Travis McCabe’s. 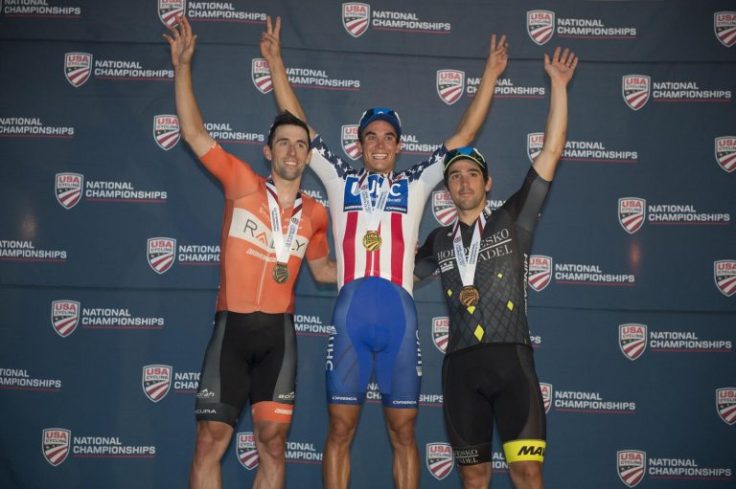 From left, Eric in second, Travis on the top step, and Ty Magner in third: the Men’s Pro Criterium podium in Louisville

Here is the link: https://www.youtube.com/watch?v=AeWm6kkZUt8  First, scroll forward to 6:16 for the final pro sprint. (Eric is not correctly ID’d until 6:20 when he’s finally announced for second place, with Brad Huff in at fourth). Medals presented at 6:37

And if you want to watch the race all the way through you’ll see that the true winner might be 19-year-old Brandon McNulty, a first-year pro who announced his presence by holding off everyone until one lap to go. He didn’t make the podium for the crit, but he’d won the Individual Time Trial two days before, and he almost turned the pro crit into another time trial win.

Eric’s girlfriend, in town from Colorado, waited with us. Then he rode up, still sweaty an hour after the race, threw his bike atop the rack, participated in his team manager’s talk inside their van. She waited for him, and they walked together, back to our hotel, heading for a late supper.